Samuel Beckett died on December 22 1989 in Paris. Some of the most iconic images of Dublin-born novelist and playwright were taken by John Minihan who tells Tony Bailie how he spent more than a decade waiting to photograph the ‘reclusive Irishman’

It was a series of pictures of a wake in Athy, Co Kildare, that persuaded the notoriously media-shy Samuel Beckett to allow John Minihan to photograph him. Dublin-born Minihan was a press photographer working in London but returned each year to Athy, where he was raised, and used his cameras to capture street scenes and people.

When he first met Beckett in the summer of 1980 in a London hotel he brought along pictures he’d taken at the wake of a woman called Katy Tyrell. “He still had a soft Dublin accent,” recalls Minihan. “He spent a long time looking at each photo. I think he just liked the ordinariness of those scenes from an Irish town.” Minihan says he had to play a long game and had been waiting for 10 years to photograph his fellow Irishman. “In 1969 I was working for the Evening Standard in London,” he said. “One night a backbench subeditor asked did we have any pictures of ‘some reclusive Irishman, who was living in Paris and who had just won the Nobel Prize for Literature’.”

“We had just one muzzy picture of Sam and so from then on it was my business to track down the ‘reclusive Irishman’.”

Beckett was born in Dublin in 1906 and was sent to board at Portora Royal School in Enniskillen, Co Fermanagh, before attending Trinity. Despite being a precocious scholar, he spent his early adulthood drifting around London and Europe.

Beckett’s early short stories and novels published in the 1930s failed to make him any money and he lived in obscurity and poverty in Paris. In 1938, after being stabbed by a pimp and almost dying, Beckett began a lifelong relationship with Suzanne Dechevaux-Dumesnil, who remained his wife until she died just a few months before Beckett.

Following the Nazi invasion of Paris in 1940, Beckett worked for the French Resistance and narrowly avoided capture by the Gestapo. However, things became too dangerous for them and in 1942 he and Suzanne fled Paris to the south of France. He continued to work for the Resistance until the end of the war.

This period saw a distinct shift in his style of writing. Switching from English to French, Beckett’s prose became more spartan and his themes more bleak. A trilogy of novels, Molloy, Malone Dies and The Unnameable, written between 1947 and 1950, heralded his most intensive creative phase, but it was a play, En Attendant Godot, first performed in 1953, that secured his literary reputation translated into English as Waiting For Godot, the play brought Beckett international success and global attention, that along with Krapp’s Last Tape, Endgame and Happy Days, TV and radio plays and his prose secured him the Nobel Prize in 1969.

John Minihan says his initial attempts to contact Beckett came to nothing.

“Then in 1980 I got a phone call from a friend who worked at the Hyde Park Hotel and he said Sam was staying. I went over that afternoon but was told by the hotel reception there was no-one by that name. But I knew there was because I trusted my friend, so I sent a note and said that I was an Irish photographer and that I would like to show him my pictures of the wake of Katy Tyrell.

“When I phoned the next morning I was put through and he invited me round.”

“People who knew Sam will always tell you that he made no distinction about social class. I hadn’t studied literature but Sam was interested in photography – as a playwright he had an ear for voice and an eye for a face.”

“One of the photos was of two cornerboys waiting for a bus in Athy and they were like two Beckettian characters, Estragon and Vladimir in Waiting For Godot.

“Sam said it was fine portrait and I think that because I was able to tell him the names of the two people in the picture it added a sense of dignity to the occasion.”

Minihan photographed Beckett in his hotel room in 1980 and then again in London in 1984 but he was determined to capture him in the city where he had made his home and in December the following year travelled to Paris. “Sam agreed to meet me but asked me not to bring my camera,” says Minihan. “I suggested we meet in a typical Parisienne people-watching-café I had found, but he wanted to go to another place.”

Le Petit Café at the PLM Hotel, was a few minutes’ walk from Beckett’s apartment on Boulevard St Jacques. Minihan describes it back then in 1985 as non-descript and functional and not the sort of place he expected a literary giant to frequent, “so of course very Beckettian”. “Eventually he agreed to let me take some pictures and we agreed to meet the next day at 3pm. In the morning I went to Pierre Le Chaise Cemetery to photography Oscar Wilde’s grave.

“I then went back to the café early to secure a table by window, because I wanted to make sure I had good light. When Sam arrived, punctually as always, I could see him smiling because he knew what I was at. We drank coffee and started talking – quite banal stuff about the price of a pint of Guinness back in Ireland. When Minihan told him about going to Pierre Le Chaise, Beckett started reminiscing about friends who were buried there – but the photographer could see that the light was fading.

“I thought the moment was going to pass until about 4.30 he said I could start taking pictures.”

John Minihan has photographed Jimi Hendrix, William Borroughs, The Who and Rolling Stones, Francis Bacon and Patti Smith. His photographs of the then Lady Diana Spencer shortly after she was linked to Prince Charles in 1980 were flashed around the world. His pictures were also used on the covers of four Van Morrison albums.

However, those images of the ‘reclusive Irishman’ have left Minihan forever associated with Beckett.

“I found myself in the presence of monumental genius,” he says.

“Sam thrived on images and I think he understood the importance of photography – but also I think that Irish connection helped establish a sense of trust.” 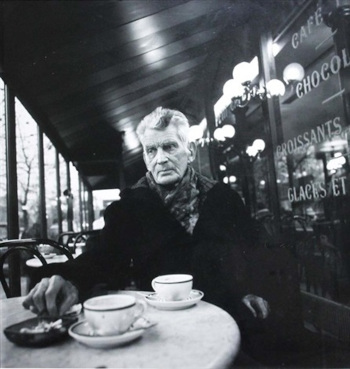