The crowded public buses that clatter through the streets of Santiago de Chile look like they were made in the 1950s and the wooden seats inside them would not be out of place in someone’s garden. The buses positively rattle as they career along the bumpy side streets of Santiago’s suburbs and into the commercial centre, yet underground the city’s metro system is a model of spotless post-modern efficiency with the trains looking as if the wrapping paper has just been taken off them. The public transport system is characteristic of the Chilean capital where an old-worldliness often clashes with the ultra-modern and Spanish style churches dating from the days of the conquistadores nestle in the shadows of towering mirrored skyscrapers. As if this meshing of old and new was not enough to unsettle the first-time visitor, you also have to come to terms with sudden and unexpected glimpses of the snow-capped Andes looming between the skyscrapers.

The main thoroughfare in Santiago is named after General Bernardo O’Higgans (whose father was Irish) who led Chile’s fight for independence against the Spanish in the 1800s. At the centre of the city is the Plaza de Armas which is a good place to get your bearings and to simply soak up the atmosphere, watch buskers, chess tournaments and occasionally even get caught up in political protests. Close by is the Mercado Central where fresh fish packed in ice tumble from market stalls and dozens of restaurants compete to draw customers into their confines for seafood dishes. Around the city centre are various barrios, including the bohemian Barrio de Brazil and the more upmarket Barrio Bellavista which is built around the foothills of the 2,800-ft Cerro San Cristobal. Music bars and restaurants are dotted throughout the district and the brightly coloured houses with people sitting in the doorways nodding at passersby give it a relaxed feel.

One of the most eccentric residences in Bellavista is known as La Chascona (‘the woman with the tangled hair’), which belonged to Chile’s most famous poet Pablo Neruda and his third wife Matilde Urrutia, known for her frizzled hair. La Chascona is not so much a house as a cluster of buildings which has now been turned into a museum commemorating the poet – whose most famous poem starts “Tonight I write the saddest lines’ – and where the gold medal he received after being awarded the Nobel Prize for literature in 1971 is on display. Neruda died a few days after a right-wing coup overthrew the socialist president Salvador Allende

I walk to the summit of the Cerro San Cristobal rather than take one of the crowded cable cars. Pilgrims come to pray at a statue of the Virgin Mary which sits on top of the mountain, while others simply come to gaze on the city spread out below and the imposing mountain range on the horizon. It is up here that I start to get a sense of the full grandeur of the Andes which run the length of Chile and separate it from Argentina. A TV crew approaches me and the presenter asks where I am from and when I tell her she ask if I will do an interview about my experience of Chile and why I came to visit. That night I flick the various news channels in the hostel where I am staying, dreading actually having to watch myself mauling the Spanish language as I gibber with ungrammatical enthusiasm. Fortunately, I don’t see myself and the next day no-one seems to recognise me in the streets.

Chile stretches for around 2,000 miles along the south western coast of South America and travelling through the country by road involves marathon journeys – 30 hours from Santiago to the northern city of Arica. The green countryside surrounding Santiago that sweeps up into the Andes is quickly replaced by endless rocky grey desert, with only the Pacific Ocean breaking onto the shore to relieve the monotony between cities. From Arica it is another bus journey, but this time along a constantly spiralling road that twists upwards into the Andes to more than two miles above sea level and the Bolivian border where I am given tea made from coca leaves to help alleviate altitude sickness.

Bolivia is one of the poorest countries in South America and many of the native Quechua and Aymara people, who are descended from the Incas, still farm the harsh mountain land. Stone walls, that would not be out of place in the Mourne Mountains, slice across the land, but the flocks that graze here are llamas rather than sheep, and the slopes on which they are built are live volcanoes.

In a saucer shaped valley is the capital. Many of the building in La Paz seem to simply cling to sides of the valley and some of the streets run at absurdly steep angles – which is fine for going down hill, but exhausting when I have to come back up. Things are not helped by the city’s high altitude where the oxygen levels are just 70 per cent of those at sea level, leaving me breathlessness and light-headed. I am advised to walk slowly and rest often and this also gives me time to linger in the endless nooks and crannies throughout the city. Many of the streets are lined with indigenous Bolivian women – dressed in multi-layered, bell-shaped skirts and wearing bowler hats – selling food and drinks to passers-by. One of the most intriguing areas lies in the streets behind the central Iglesia de San Francisco where there is a witches’ market selling everything from potions and charms, through to dried llama foetuses. About two hours outside of La Paz is Tiahuanaco a 2,000-year-old temple site which pre-dates the Incas and whose precise alignment displays a detailed understanding of astronomy. The most interesting monument at the site is the 10-tonne Gateway to the Sun which includes intricate carvings of humans, condors and a variety of symbols. A Dutch woman called Monica takes it on herself to educate me about the “true significance” of the heads that have been carved into the walls of the nearby sunken courtyard.

“You can see that the features clearly depict native American, African, Asian and European figures,” she tells me with all the passion of a missionary looking to convert someone to their cause.

“But they were carved more 2,000 years ago and so there must have been contact between the peoples of the various continents long before Christopher Columbus discovered the Americas in the 15th century.”

I nod in agreement, but she hasn’t finished.

“But look at these… they’re not even humans,” she says gesticulating excitedly.

I look and she’s right, they have eyes and mouths but don’t look quite human. Although to be fair they probably have undergone a fair bit of wear and tear over the millennia. “Non-humans, or else human races that no longer exist, but which did or at least which the temple builders were aware of 2,000 years ago. Or else non-human visitors. From other planets, or other dimensions.”

Monica gestures again to the carving as if the evidence is irrefutable. 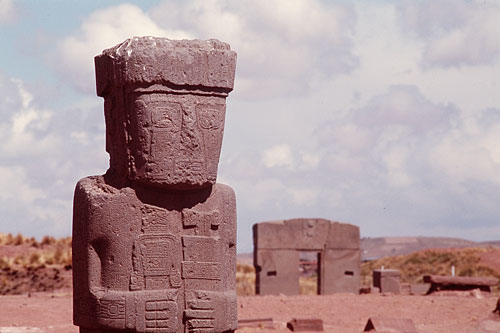