India: The Ganges and Himalayas

A group of people are bent over a bundle on the ground – a middle-aged woman and some younger men, including one with a ponytail sprouting from a shaved head. Gradually they start to shuffle the bundle towards the river, the man with the shaved head descending a couple of steps into the fast-flowing water and with the help of the others eases a large black plastic bag towards himself. He tilts the opening and pours a cloud of dust that briefly swirls on the undulating surface of the river before dispersing. The shaven-head man submerges the black bag and fills it with water, washing out the remaining contents before releasing it as well to be swept downstream. The man in the River Ganges lifts handfuls of water to douse his upper body before mounting the steps to the ‘ghat’ – a paved area with steps dipping into the river where Hindu rituals take place. He briefly rejoins the woman and young men to stand and gaze downstream as the ashes of their dead relative disperse before making way for others who wish to perform rites, rituals or simply douse themselves in the river’s waters. The River Ganges, worshipped as a manifestation of the goddess Ganga by Hindus, emerges from the Himalayas just a few kilometres from Haridwar.

The city has added spiritual significance because Hindus believe it is one of the sites where a celestial bird called Garuda accidentally spilt drops of the elixir of immortality. As evening darkens to night those gathered on the ghat release wreathes of flowers with candles burning in the centre into the river to swirl in aimless eddies before catching a current and being swept way. Others gather in groups to chant mantras accompanied by drums, tinkling bells and crashing cymbals. As well as milling pilgrims, and aimlessly meandering cows of course, there are wandering sadhus – holy men dressed in orange robes. Some of the younger ones have simply dropped out for a while but for the ones with longer beards it has become a way of life.

However, away from the ghat the spiritual frenzy takes on a more commercial tone and the streets bulge with souvenir kiosks, food stalls, shops selling mobiles phones, hotels and ashrams. Green hills rise in the countryside surrounding Haridwar towards the Shivalik mountain range that in turn ascends into the Himalayas. Ragaji National Park is home to herds of wild elephants, two species of deer, monkeys, tigers and leopards. In the distance a herd of elephants lingers close to the shelter of a tangle of bushes, a mother and baby lagging behind. Sitting in a tree a white eagle screeches while a stork, visiting to escape the savage winter of Siberia, soars overhead. As the day fades the bushes rustle, the deer stand still, tense and sniffing the air but the tigers and leopards stay hidden and I leave disappointed.

From Haridwar I shift base 17 kilometres by autorickshaw up the road to Rishikesh where the Ganges pours out of the Himalayas and down through India and into Bangladesh. Here too Hindu pilgrims gather on the ghats to worship at its multi-tiered temples, but the shops are more new-agey and the restaurants, while still for the most-part vegetarian, offer pizza and Tibetan cuisine catering for western spiritual seekers and trekkers who also gather here. Rishikesh gained its international reputation in 1968 when the Beatles and their entourage came to find enlightenment in the ashram of the Maharishi Mahesh Yogi. Back then the ashram included a hospital, post office, supermarket, hotel, luxury apartments and meditation pods overlooking the Ganges but it has lain abandoned since the early ‘70s. It lies past the last settlements of Rishikesh and there are no signposts to it – a sign on the padlocked gate says ‘No Entry’, however an accommodating security guard (who is happy to accommodate the 50 rupee note I slip him) unlocks the gate and ushers me in. Pod Number Nine was where John Lennon meditated but it is cracked and crumbling now, tendrils of jungle slithering through its brickwork. The pathways are overgrown and strewn with huge elephant turds. The luxury hotel, the hospital and even the Maharishi’s private accommodation are all being slowly sucked back into the foliage which was once cleared to make way for them.

At 1,500 metres the temple on top of Kunjapuri isn’t the highest in the area but it is from here that I catch sight of the snow-covered peaks of the Himalayas proper. Stooping into the temple to be engulfed by a billow of incense an old woman marks a tilik – a pressed thumb of red dye and some grains of rice – onto my forehead. Brightly painted, almost cartoonish paintings adorned the walls as pilgrims mutter prayers before coming back outside to ring a bell.

The rituals and the significance of the temple are mysteries to me but the shimmering snow-covered crags on the horizon – Bandarpoonch and Chaukhamba, which is nearly 8,000 metres high – are hauntingly beautiful and I want to be on them, even more so as my superbly knowledgeable guide Chandar tells me about expeditions he has led or taken part in. We start to descend along the winding road which leads up to the temple but soon cut off into barely defined track of shifting shale, past scrub and forest.

Occasionally the foliage is broken by a strip of cultivated land and a few houses, but Chandar tells me that most of them have been abandoned as people flee the unpredictability of life in the country for the crowded but more stable incomes provided by the cities. Chandar stops to talk to a group of women gathering sticks and while I can’t understand the conversation their narrow, sinewy faces say more about the lives they live than language could ever do. 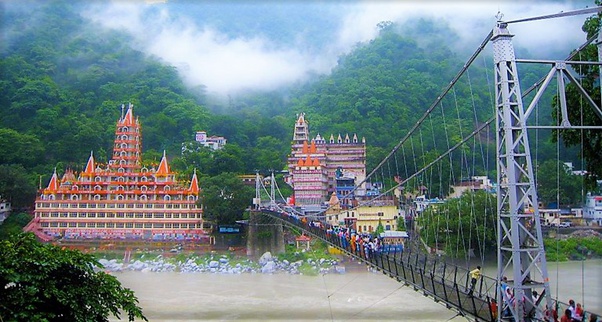